The action sequel heading to Blu-ray in March has now been fully detailed.

Picking up some time after the events in the first movie, Sean Lau is now the Commissioner of Police after the successful rescue operation. However, things turn bad when his wife and daughter are kidnapped. Sean has to seek help from former rival and retired DCP, Waise Lee, to return to his job to help save Sean's wife and child.

The release will feature 1080p video, lossless 5.1 audio, and supplements include: A Powerhouse Cast; The Story; The Three Powers; and VFX and Action.

You can find the latest specs for 'Cold War II' linked from our Blu-ray Release Schedule, where it's indexed under March 7. 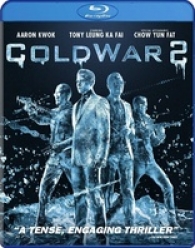