The adventure film starring Tony Leung is set for Blu-ray in June, and you can pre-order the movie here.

In an early announcement to retailers, Well Go USA is preparing 'The Taking of Tiger Mountain' for Blu-ray on June 2.

Tsui Hark's thrilling adaptation of Qu Bo s beloved adventure novel stars Tony LEUNG Ka-fai as a ruthless bandit, ruling the lands of Northeast China from his fortress on Tiger Mountain. A captain of the Liberation Army (LIN Gengxin) launches a counter-insurgency against the dictator with a skilled investigator (ZHANG Hanyu) sent to destroy the gang from the inside.

Specs have not been announced yet, but supplements will include: Interviews with Director and Cast and Trailer.

You can find the latest specs for 'The Taking of Tiger Mountain' linked from our Blu-ray Release Schedule, where it's indexed under June 2. 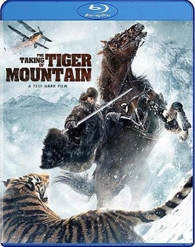 Discs mentioned in this article: (Click for specs and reviews)
The Taking of Tiger Mountain (Blu-ray)