The Korean adventure film is sailing toward Blu-ray in January. You can pre-order the movie here.

In an early announcement to retailers, Well Go USA is preparing 'The Pirates' for Blu-ray on January 20.

On the eve of the founding of the Joseon Dynasty, an unprecedented robbery shocks the nation-in-waiting: a whale has swallowed the Emperor's Royal Seal, and a bounty placed on its retrieval. Now, every infamous gang of thieves, thugs, pirates, and government agents take to the seas, battling the elements, creatures of the deep, and each other to possess the mother of all rewards.

Specs and supplements have not been anounced yet, but suggested list price for the Blu-ray is $29.98.

You can find the latest specs for 'The Pirates' linked from our Blu-ray Release Schedule, where it's indexed under January 20. 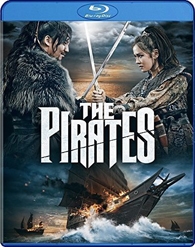 Discs mentioned in this article: (Click for specs and reviews)
The Pirates (Blu-ray)