The Korean crime drama is heading to Blu-ray in December, and pre-orders are now live.

In an early announcement to retailers, Well Go USA is preparing 'Traffickers' for Blu-ray on December 23.

After his best friend dies in an unexpected accident, black market dealer Young-gyu decides to wash his hands and start a new life with Yu-ri. But his dream is not ready to come true when he learns that Yu-ri needs money for her dad's surgery. To help her out, Young-gyu decides to do one last job. This time he has to deliver human organs to China. A target is fixed and all the members gathered on the ship. However, things go wrong when Young-gyu finds Yu-ri on the same ship.

Supplements have not been detailed yet, but the Blu-ray will feature 1080p video and a Korean DTS-HD MA 5.1 soundtrack.

You can find the latest specs for 'Traffickers' linked from our Blu-ray Release Schedule, where it's indexed under December 23. 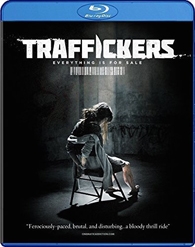 Discs mentioned in this article: (Click for specs and reviews)
Traffickers (Blu-ray)