In an early announcement to retailers, Well Go USA will be releasing 'Killers' on Blu-ray on April 7.

A series of horrific murders just went viral, posted anonymously by the handsome and seductive Nomura (Kazuki Kitamura), a predator with a taste for torture. Thousands of miles away, disgraced journalist Bayu (Oka Antarra) can't stop watching – and in a reckless moment discovers he, too, can kill. One man in Tokyo. One in Jakarta. A serial killer and a vigilante. As the posts multiply and the body count rises, a bizarre and psychotic rivalry begins – and the face-to-face showdown that's coming will paint the city in blood.

You can find the latest specs for 'Killers' linked from our Blu-ray Release Schedule, where it is indexed under April 7. 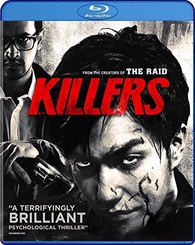