In an early announcement to retailers, Well Go USA is preparing 'Supremacy' for Blu-ray on April 21.

Tully (Joe Anderson) just got paroled. But his first night out could be his last. He just killed a cop. He's on the run. And no one's going to listen to an ex-con with the Aryan Nation. His leader (Anson Mount) just cut him loose, and as the police close in, Tully and his girlfriend (Dawn Olivieri) add home invasion and hostages to the body count. But no one counted on Mr. Walker (Danny Glover), an ex-con himself, to fight back - using his understanding of the racist mind to turn the tables on a desperate and violent man. Will it be enough to keep his family alive?

You can find the latest specs for 'Supremacy' linked from our Blu-ray Release Schedule, where it's indexed under April 21. 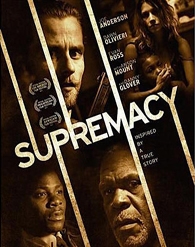 Discs mentioned in this article: (Click for specs and reviews)
Supremacy (Blu-ray)