The crime comedy will murder Blu-ray with laughs this March.

In an early announcement to retailers, Well Go USA will be releasing 'Let's Kill Ward's Wife' on Blu-ray on March 3.

Everyone hates Ward's wife and wants her dead. Especially Ward (Donald Faison). But when murderous fantasies accidentally get real, Ward and his pals have all new problems: Disposing of the body. Getting away with murder. Making their 3pm tee time.

The Blu-ray will feature 1080p video, a lossless 5.1 soundtrack, and the only supplement is outtakes.

You can find the latest specs for 'Let's Kill Ward's Wife' linked from our Blu-ray Release Schedule, where it is indexed under March 3. 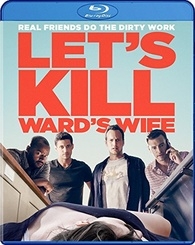