The neor-noir drama heads to Blu-ray in July.

In an early announcement to retailers, Well Go USA will be releasing 'For the Emperor' on Blu-ray on July 7.

A disgraced pro baseball player goes to work for a mob-connected loan shark, rising through the ranks of money and power. But when his love interest disappears, he finds himself in a deadly battle of wits against his bloodthirsty mentor.

You can find the latest specs for 'For the Emperor' linked from our Blu-ray Release Schedule, where it is indexed under July 7. 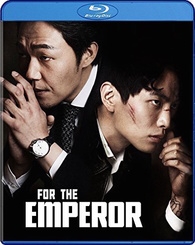