The Hong Kong action flick is now up for pre-order.

In an early announcement to retailers, Well Go USA is preparing 'Wild City' for Blu-ray on November 10.

When former cop-turned-bar owner T-man Kwok (Louis KOO) befriends a drunken woman at closing hours (TONG Liya), they soon find themselves targeted both by her former lover—a high-powered Hong Kong attorney—and the thugs (CHANG Hsiao-Chuan) he employs. Once Kwok’s underachieving half-brother (Shawn YUE) and a suitcase full of tainted cash enter the picture, the chase turns deadly, with the brothers’ tense family history coming to the surface as Kwok finds himself torn between the triads and his former police colleagues.

The Blu-ray will feature 1080p video, a Cantonese DTS-HD MA 5.1 soundtrack, and supplements will include: Making of and Behind the Scenes.

You can find the latest specs for 'Wild City' linked from our Blu-ray Release Schedule, where it's indexed under November 10. 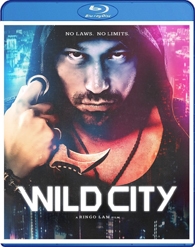 Discs mentioned in this article: (Click for specs and reviews)
Wild City (Blu-ray)