Ding Sheng's action flick is heading to Blu-ray in June.

In an early announcement to retailers, Well Go USA is preparing 'Railroad Tigers' for Blu-ray on June 20.

In this action-comedy caper harkening back to Jackie Chan's classic Hong Kong films, a railroad worker (Chan) and his ragtag group of freedom fighters find themselves on the wrong side of the tracks when they decide to ambush a heavily armed military train filled with desperately needed provisions. Unarmed and outnumbered, they must fight back against an entire army using only their wits, in a series of a dazzling set pieces and action scenes rivaling anything seen on the big screen.

You can find the latest specs for 'Railroad Tigers' linked from our Blu-ray Release Schedule where it's indexed under June 20. 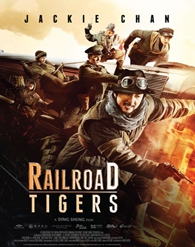 Discs mentioned in this article: (Click for specs and reviews)
Railroad Tigers (Blu-ray)