The epic fantasy adventure film heads to Blu-ray in August.

In an early announcement to retailers, Well Go USA is working on 'Snow Girl and the Dark Crystal' for Blu-ray on August 4.

Shot in scenic locations in Mainland China, Snow Girl and the Dark Crystal depicts the story of Chinese legendary anti-hero Zhong Kui, a young man endowed with mysterious powers who is forced into a battle among the realms of Heaven, Earth and Hell in the course of his attempt to save his countrymen and the woman he loves.

Specs have yet to be revealed, but supplements include a making of featurette and trailer.

You can find the latest specs for 'Snow Girl and the Dark Crystal' linked from our Blu-ray Release Schedule, where it is indexed under August 4. 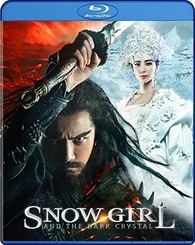