The action crime flick will hit Blu-ray in 2015. You can pre-order the disc here.

In an early announcement to retailers, Well Go USA is preparing 'Once Upon a Time in Shanghai' for Blu-ray on January 13.

Everyone wants to make their fortune in Shanghai, and Ma Yongzhen (Philip Ng) dreams of making an honest living not with his fists. But the town is torn apart by rival gangs, and when Boss Long Qi (Andy On) learns of Ma s formidable martial arts skills, takes him into the family. Opposed to drug trafficking and leaking government secrets, Qi makes powerful enemies. And soon, Ma won t have a choice. Fight, or lose everything - including his friend (Sammo Hung) and his love, Tie Ju (Michelle Hu).

The Blu-ray will feature 1080p video, a Cantonese DTS-HD MA 5.1 soundtrack, and supplements will include: Making of Featurette and Original Trailer.

You can find the latest specs for 'Once Upon a Time in Shanghai' linked from our Blu-ray Release Schedule, where it's indexed under January 13. 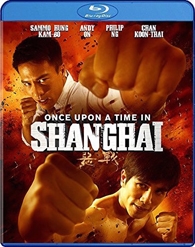 Discs mentioned in this article: (Click for specs and reviews)
Once Upon a Time in Shanghai (Blu-ray)