The South Korean hit movie is bound for Blu-ray in October. You can order the Blu-ray here.

In an early announcement to retailers, Well GO USA will be bringing 'Kundo: Age of the Rampant' to Blu-ray on October 21.

Set in the mid-19th century, the tongue-in-cheek historical comedy-action film depicts a power struggle between the unjust wealthy noblemen who run society and a group of righteous outlaws who steal from corrupt officials to give to the downtrodden and starving. Directed by Yun Jong-bin (Nameless Gangster: Rules of the Time), KUNDO: AGE OF THE RAMPANT stars Ha Jung-woo (The Berlin File), Kang Dong-won (Haunters), Lee Sung-min (The Good, the Bad, the Weird) and Ma Dong-seok (Quick). When the film opened this summer, it broke all existing opening day box office records in South Korea.

You can find the latest specs for 'Kundo: Age of the Rampant' linked from our Blu-ray Release Schedule, where it is indexed under October 21. 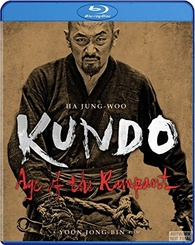