The powerful drama starring Thomas Haden Church and Terrence Howard is planned for Blu-ray in November.

In an early announcement to retailers, Well Go USA is preparing 'Cardboard Boxer' for Blu-ray on November 15.

Willie is one of Los Angeles's many homeless people. One day, a group of rich teens come around offering to pay Willie and his contemporaries to fight each other. Caught up in this violent, underground sport, Willie has only the burnt diary of a little girl to keep him company and provide him with the willingness to push through life.

You can find the latest specs for 'Cardboard Boxer' linked from our Blu-ray Release Schedule, where it is indexed under November 15. 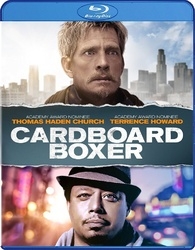