The action-packed crime drama will be sentenced to Blu-ray in July.

In an early announcement to retailers, Well Go USA has revealed 'Kill Zone 2' is headed for Blu-ray on July 19.

When an undercover cop gets too close to revealing the mastermind of a drug syndicate, his cover is blown. Double-crossed and under a false identity, he's thrown into a Thai prison, where a guard discovers the inmate - claiming he's a cop - is a bone marrow match for his dying daughter ... and his warden may have an even deadlier operation hidden within the prison walls.

Directed by Pou-Soi Cheang (Accident, Motorway), the film is a breakneck story of dirty cops, prison riots, and black market organ transplants, all brought together by a non-stop series of inventive, bone-crunching setpieces. Rated 100% on Rotten Tomatoes, Kill Zone 2 was named a "Film of Merit" at the 2016 Hong Kong Film Critics Society Awards and Chung Chi Li (Ip Man: The Final Fight) won a Golden Horse at the 2016 Hong Kong Film Awards for Best Action Choreography.

Specs have yet to be revealed, but supplements include: 3-Part Making-of Featurette and Deleted Scenes.

You can find the latest specs for 'Kill Zone 2' linked from our Blu-ray Release Schedule, where it is indexed under July 19. 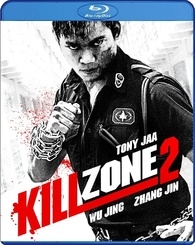