The horror classic has received a 4K restoration and will get a Blu-ray release in December.

In an early announcement to retailers, Well Go USA is working on 'Phantasm' for Blu-ray on December 6.

Since its release in 1979, director Don Coscarelli's epic tale of The Tall Man, his deadly silver Sentinel Spheres, and group the small town friends who must band together to stop his dimension-hopping schemes has captivated and terrified horror and sci-fi fans around the world. An immediate success, bringing in 40 times its production budget, the film has influenced generations of filmmakers.

Thirty-seven years later, Phantasm has been finally restored to its original glory by J.J. Abrams' Bad Robot and Coscarelli, with a stunning new 4K remaster and 5.1 surround sound mix from the original elements that ensures Phantasm will be around to scare the hell out of generations to come.

You can find the latest specs for 'Phantasm' linked from our Blu-ray Release Schedule, where it is indexed under December 6. 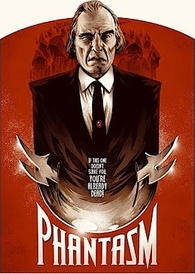