The action-packed crime thriller will be available on Blu-ray this August.

Four devious criminals, one chilling scam: pose as cops, kidnap a victim, and if no ransom comes in 24 hours, the target dies. Tonight they caught a movie star (Andy Lau) and the countdown begins. Based on actual events.

Specs have yet to be revealed, but supplements include a 4-Part "Making Mr. Wu" Featurette and Deleted Scenes.

You can find the latest specs for 'Saving Mr. Wu' linked from our Blu-ray Release Schedule, where it is indexed under August 2. 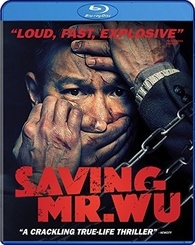