The crime thriller is headed for a Blu-ray in February.

In an early announcement to retailers, Well Go USA is preparing 'Beyond Redemption' for Blu-ray on February 7.

After successfully passing an initiation test to join the upper ranks of the Ching Tau Gang, undercover cop Billy Tong (Brian Ho) is brought in on a plan for a home invasion against a wealthy Chinese businessman that will give Billy the evidence he needs to bring down the gang. As plans are proceeding, Billy learns that his ex-wife is pregnant and begins questioning his career choices. Although Billy realizes the need to put things right and prepare for his new family, his checkered past as a police officer complicates his decision to simply be reassigned. Things become complicated when he is forced to protect the daughter of a rival gang leader's daughter when he learns both sides are planning to strike an important deal.

Specs have yet to be revealed, but supplements include: "Hallway Fight" and "Mauler Opening Fight" featurettes.

You can find the latest specs for 'Beyond Redemption' linked from our Blu-ray Release Schedule, where it is indexed under February 7. 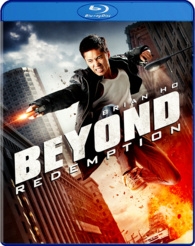