The crime actioner is slated for Blu-ray in December.

In an early announcement to retailers, Well Go USA is preparing 'Call of Heroes' for Blu-ray on December 6.

Multiple Award-Winning Director Benny Chan (Connected, The White Storm) directs a star-studded lineup of action stars in Call of Heroes. Koo stars as the spoiled son of a powerful General who has grown into a vicious and depraved Warlord. Accused of triple murder, his father will destroy the town if his son is convicted and sentenced to death. But injustice cannot go unanswered, and the villagers prepare for the repercussions of punishing a guilty man.

Specs have yet to be revealed, but supplements will include the original trailer and the original Cantonese version of the film.

You can find the latest specs for 'Call of Heroes' linked from our Blu-ray Release Schedule, where it is indexed under December 6. 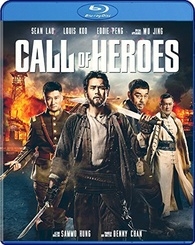