The miniseries adapted by Sarah Phelps and director Jonny Campbell comes to high-definition in August.

In an early announcement to retailers, Warner Brothers is preparing to release 'The Casual Vacancy' on Blu-ray on August 4.

'The Casual Vacancy' centers on Pagford, a seemingly idyllic English village with a cobbled market square and ancient abbey. Behind the pretty facade, however, is a town at war: rich at war with poor, teenagers at war with their parents, wives at war with their husbands, teachers at war with their pupils. The story begins with the death of beloved Parish Councillor Barry Fairbrother, leaving a seat on the council vacant. Those running for a place soon find their darkest secrets revealed on the Parish Council online forum, ruining their campaign and leaving the election in turmoil.

You can find the latest specs for 'The Casual Vacancy' linked from our Blu-ray Release Schedule, where it is indexed under August 4. 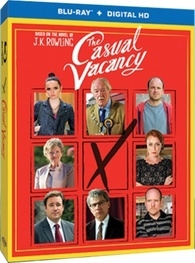