The release arriving in February will also include new supplemental material. Pre-order here.

In an early announcement to retailers, Warner Brothers will be releasing 'Gravity: Diamond Luxe Edition' on Blu-ray on February 10.

Seasoned astronaut Matt Kowalsky is on his final mission in space, while medical engineer Dr. Ryan Stone is making her first outing on the Space Shuttle. While they are engaged in extra-vehicular activity, debris collides into the shuttle, damaging it irreparably. Kowalsky and Stone now find themselves drifting in space with low oxygen supplies, and cut off from all communication on Earth. They work together in their attempt to survive, but will they make it back to solid ground?

The Blu-ray will feature 1080p video, Dolby Atmos sound, and there will be three new special features including a "Silent Space Version" of the film enabling fans to experience the movie "without music for a surprising cinematic experiment."

You can find the latest specs for 'Gravity: Diamond Luxe Edition' linked from our Blu-ray Release Schedule, where it is indexed under February 10. 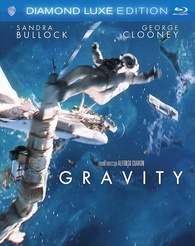