The film based on the true story of the 33 trapped miners in Chile arrives on Blu-ray next month.

In an early announcement to retailers, Warner Brothers will be releasing 'The 33' on Blu-ray on February 16.

Based on the gripping true story of survival – and filmed with the cooperation of the miners, their families and their rescuers – The 33 reveals the never-before-seen actual events that unfolded, above and below ground, which became nothing less than a worldwide phenomenon.

The Blu-ray will feature 1080p video, lossless 5.1 audio, and supplements include: The Mine Collapse; The 33: The World Was Watching; and Theatrical Trailer.

You can find the latest specs for 'The 33' linked from our Blu-ray Release Schedule, where it is indexed under February 16. 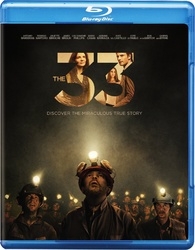