'War and Peace' Announced for Blu-ray

King Vidor's 1956 classic is headed to Blu-ray in January. Pre-order this release here.

In an early announcement to retailers, Warner Brothers is preparing 'War and Peace' on Blu-ray on January 20.

Leo Tolstoy's literary masterpiece comes to life in this epic film classic, featuring the talents of some of the greatest names from Hollywood's Golden Age. War and Peace is a compelling story of international conflict, spectacular adventure, gripping intrigue and tragic romance set against the sweeping backdrop of Napoleon's invasion of Russia. Vidor's version was also the first English-language adaptation of the tale.

Specs and supplements haven't been revealed yet, but the suggested list price for the Blu-ray is $14.97.

You can find the latest specs for 'War and Peace' linked from our Blu-ray Release Schedule, where it's indexed under January 20. 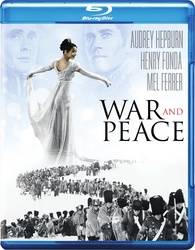