The final season of the sci-fi series is set to arrive in February. Pre-order your copy at Amazon.

As previously reported, Warner Bros. is preparing 'Falling Skies: The Complete Fifth Season' for Blu-ray, and now the date has been set for February 2.

'Falling Skies: The Complete Series' will also be available on the same date.

As season five opens, all breed of beast and mutant are running rampant on earth. The Espheni's power core has been destroyed, and humans are now ready to fight on their terms. And after four years of being tortured, Tom and the 2nd Mass are filled with rage, ready to destroy the enemy in an all-out battle to determine the fate of Earth.

The Blu-ray will feature 1080p video, lossless 5.1 audio, and supplements include: Farewell interviews with the cast and crew, including Noah Wyle, Colin Cunningham, Doug Jones and more, as well as "A Look Back," an exclusive group interview with Doug Jones, Colin Cunningham and Sarah Carter.

You can find the latest specs for 'Falling Skies: The Complete Fifth Season' linked from our Blu-ray Release Schedule, where it's indexed under February 2. 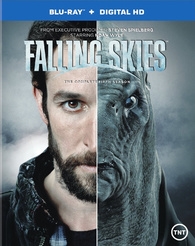