The CW vampires return to Blu-ray this fall.

In an early announcement to retailers, Warner Brothers is working on 'The Vampire Diaries: The Complete Sixth Season' for Blu-ray on September 1.

The Vampire Diaries continues its sixth season with more delicious drama to sink your teeth into. In season five, after a passionate summer with Damon, Elena headed to Whitmore College with Caroline, not knowing Bonnie sacrificed her life for Jeremy's. Meanwhile, Stefan and Caroline's friendship deepened as they stood up to the Travelers, a nomadic witch tribe driven to strip Mystic Falls of magic and cast out its supernatural residents. In the shocking season finale, Damon, fearing he would lose his loved ones on the crumbling Other Side, made a huge sacrifice to bring them all back — with catastrophic and heartbreaking results. Season six follows the characters' journey back to each other as they explore the duality of good versus evil inside themselves. Matt Davis reprises his role as Alaric Saltzman, recently returned from The Other Side. Plus, the season will make you misty-eyed as the departure of a major character will turn lives upside down and leave us asking what happened to Mystic Falls.

The four-disc set will feature 1080p video, a lossless 5.1 soundtrack, and supplements include: The Vampire Diaries: Good Bite and Good Luck; The executive producers and cast of The Vampire Diaries say a final farewell to Nina Dobrev, Steven R. McQueen, Marguerite MacIntyre, and Michael Trevino, after six memorable years; The Vampire Diaries: Best.Reaction.Ever; Fan reactions to big moments throughout the season will be curated from Twitter, fan sites and other social media, and pieced together to tell the story of season six via fans' reactions; Ep.615 Audio Commentary; Writer/Director Julie Plec provides commentary on her directorial debut; The Vampire Diaries: 2014 Comic-Con Panel; Come Visit Georgia PSA; Deleted Scenes; and Second Bite: Gag Reel.

You can find the latest specs for 'The Vampire Diaries: The Complete Sixth Season' linked from our Blu-ray Release Schedule, where it is indexed under September 1. 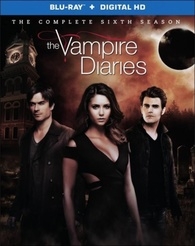