'The Majestic' Opens on Blu-ray in February

Frank Darabont's 2001 film starring Jim Carrey will soon be showing on Blu-ray. YOu can pre-order the Blu-ray now.

In an early announcement to retailers, Warner Brothers is working on 'The Majestic' for Blu-ray on February 24.

The film will also be included in 'The Frank Darabont Collection' releasing on the same date.

The year is 1951 and ambitious Hollywood screenwriter Peter Appleton (Jim Carrey) is suddenly targeted as a suspected Communist. He loses his job and his girl in quick succession and then in a serious car accident, he's left with amnesia, losing his identity altogether. Stumbling into a charming small California town where he's mistaken for Luke Trimble, one of their many long lost World War II heroes, Peter meets Luke's beautiful girlfriend Adele (Laurie Holden). His "father" Harry (Martin Landau) reintroduces Peter to the life he led before the war, and they work together as father and son to restore and reopen The Majestic, the town's long abandoned movie palace. Though his true memory eventually returns, Peter falls in love with Adele during his sojourn in the town, and he discovers the courage and the conviction he needs to become the hero of his own life.

The Blu-ray will feature 1080p video, lossless 5.1 audio, and supplements include: Movie Within the Movie: Sand Pirates of the Sierra, deleted scenes, and trailer.

You can find the latest specs for 'The Majestic' linked from our Blu-ray Release Schedule, where it's indexed under February 24. 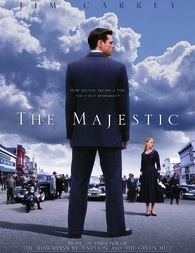