The animated comedy arrives on all three formats in June.

In an early announcement to retailers, Warner Brothers is preparing 'The LEGO Batman Movie' for Blu-ray, Blu-ray 3D, and 4K Ultra HD Blu-ray on June 13.

In the irreverent spirit of fun that made "The LEGO Movie" a worldwide phenomenon, the self-described leading man of that ensemble—LEGO Batman—stars in his own big-screen adventure. But there are big changes brewing in Gotham City, and if he wants to save the city from The Joker's hostile takeover, Batman may have to drop the lone vigilante thing, try to work with others and maybe, just maybe, learn to lighten up.

Each release will feature a Dolby at mos soundtrack and supplements include: Original Animation Shorts (Dark Hoser, Batman is Just Not That Into You, and Cooking with Alfred); Movie Sound Effects: How Do They Do That?; The Master: A LEGO Ninjago Short; Deleted Scenes; One Brick at a Time: Making the Lego Batman Movie; Inside Wayne Manor; Brick by Brick: Making of the LEGO Batman; Behind the Brick; Me and My Mini Fig; Comic Con Panel; Rebrick Contest Winners; Film Trailers; Lego Life Trailer; Social Promos; and Director and Crew Commentary.

You can find the latest specs for 'The LEGO Batman Movie' linked from our Blu-ray Release Schedule, where it's indexed under June 13. 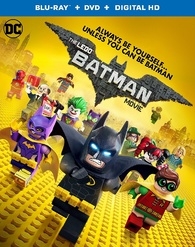 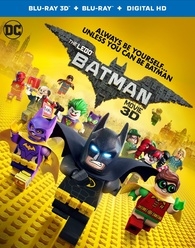 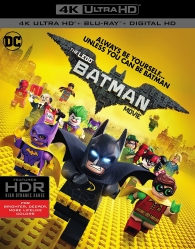