'The Intern' Dated and Detailed for Blu-ray

The latest Nancy Meyers comedy will arrive on Blu-ray in January.

In an early announcement to retailers, Warner Brothers is preparing to bring 'The Intern' to Blu-ray on January 19.

Robert De Niro stars as Ben Whittaker, a 70-year-old widower who has discovered that retirement isn't all it's cracked up to be. Seizing an opportunity to get back in the game, he becomes a senior intern at an online fashion site, founded and run by Jules Ostin (Anne Hathaway).

The Blu-ray combo pack will feature 1080p video, lossless 5.1 audio, and supplements include: Learning From Experience; Designs on Life, and The Three Interns.

You can find the latest specs for 'The Intern' linked from our Blu-ray Release Schedule, where it's indexed under January 19. 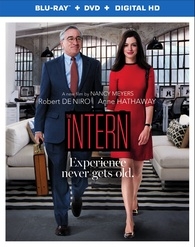