'The Following: The Complete Second Season' Blu-ray Detailed for October

The second season of the Fox crime drama arriving on Blu-ray in early October has been fully detailed. You can pre-order the show here.

As previously reported, Warner Bros. is preparing 'The Following: The Complete Second Season' for Blu-ray on October 7.

Ryan Hardy (Kevin Bacon) finds himself in the wake of a horrific new murder spree. The FBI calls on Ryan and Agent Mike Weston (Shawn Ashmore) to speak with the lone survivor, Lily Gray (Connie Nielsen), in order to help them solve the case. Ryan is reluctant to re-engage with the FBI, but finds a valuable ally in his niece, Max Hardy (Jessica Stroup), an NYPD cop working in the Intel Division. As the investigation proceeds, Ryan crosses paths with several complicated individuals, including Luke (Sam Underwood) and Mandy Lang (Tiffany Boone), which furthers his suspicion that the reign of terror of serial killer Joe Carroll (James Purefoy) and his follower, Emma Hill, (Valorie Curry) is far from over.

Suggested list price for the Blu-ray/DVD/UltraViolet combo pack is $49.99.

You can find the latest specs for 'The Following: The Complete Second Season' linked from our Blu-ray Release Schedule, where it's indexed under October 7. 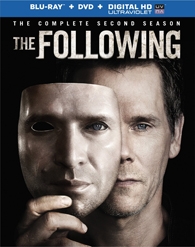