'The Flintstones and WWE: Stone Age Smackdown!' Dated for Blu-ray

In an early announcement to retailers, Warner Brothers will be releasing 'The Flintstones and WWE: Stone Age Smackdown!' on Blu-ray on March 17.

Get ready for some raw-kin' action in this all-new, original movie that brings some of WWE's toughest, wildest superstars to Bedrock! When Fred loses his family's vacation money, he hatches one of his hair brained plans to get it back. It's a sports entertainment spectacle that involves throwing his best bud, Barney into the wrestling ring with the likes of John Cenastone (John Cena), Rey Mysteriopal (Rey Mysterio) and even The Undertaker, with Fred himself as event promoter.

The crowds roar, the "clams" are pouring in from ticket sales and even Mr. McMagma (Vince McMahon) is taking notice of all the hoopla. Can Fred keep serving up bigger and badder matches or is he in for the rocky ride of his life? Including all-star appearances from The Boulder Twins (Brie and Nikki Bella) Marble Henry (Mark Henry) and Daniel Bry-Rock (Daniel Bryan), it's time to get the whole family together for a collection of hard-hitting, side-splitting laughs from the most epic event in all of prehistory.

The Blu-ray/DVD/Digital Copy combo pack will feature 1080p video, a lossless 5.1 soundtrack, and supplements include: The Wrestlers of FFE (Fred Flintstone Entertainment) Featurette, How To Be a Stone Age Wrestling Star Featurette, and Bonus Cartoons: "The Engagement Ring" and "Take Me Out To The Ballgame".

You can find the latest specs for 'The Flintstones and WWE: Stone Age Smackdown!' linked from our Blu-ray Release Schedule, where it is indexed under March 17. 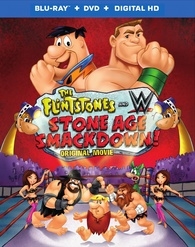