'The Art Of War' Dated for Blu-ray

The 2000 Wesley Snipes action-thriller will target Blu-ray in January. Preorders are now available.

In an early announcement to retailers, Warner Brothers says 'The Art Of War' will arrive on Blu-ray on January 13.

Shaw (Wesley Snipes) is an operative for the United Nations' covert dirty-tricks squad, using espionage and quasi-ethical tactics to secure peace and cooperation. When a shipping container full of dead Vietnamese refugees turns up on the docks and China's ambassador is gunned down at a dinner celebrating a new trade agreement with China and the US, Shaw is framed for the murder and must evade the FBI and Triad gangsters to find out what is really going on.

You can find the latest specs for 'The Art Of War' linked from our Blu-ray Release Schedule, where it is indexed under January 13. 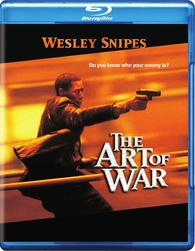