The comedy starring Melissa McCarthy will be getting an extended Blu-ray edition this November. Pre-order here.

In an early announcement to retailers, Warner Brothers will be releasing 'Tammy: Extended Edition' on Blu-ray on November 11.

Tammy (McCarthy) is having a bad day. She's totaled her clunker car, gotten fired from her thankless job at a greasy burger joint, and instead of finding comfort at home, finds her husband getting comfortable with the neighbor in her own house. It's time to take her boom box and book it. The bad news is she's broke and without wheels. The worse news is her grandma, Pearl (Susan Sarandon), is her only option—with a car, cash, and an itch to see Niagara Falls. Not exactly the escape Tammy had in mind. But on the road, with Pearl riding shotgun, it may be just what Tammy needs.

The Blu-ray/DVD/Digital Copy combo pack will feature both the theatrical and extended cuts of the film in 1080p with lossless 5.1 soundtracks, and supplements include: Tammy's Road Trip Checklist; Gag Reel; Deleted Scenes; and Fun Extras.

You can find the latest specs for 'Tammy: Extended Edition' linked from our Blu-ray Release Schedule, where it is indexed under November 11. 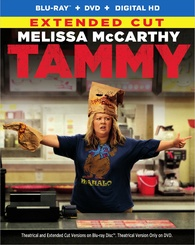