The fantasy/thriller is coming May 5. Pre-order the Blu-ray at Amazon.

As previously reported, Warner Brothers is working on 'Lost River' for Blu-ray later this year, and now the date has been set for May 5.

“Lost River” is a dark fairy tale about love, family and the fight for survival in the face of danger. In the virtually abandoned city of Lost River, Billy (Christina Hendricks), a single mother of two, is led into a macabre underworld in her quest to save her childhood home and hold her family together. Her teenage son Bones (Iain De Casestecker) discovers a mystery about the origins of Lost River that triggers his curiosity and sets in motion an unexpected journey that will test his limits and the limits of those he loves.

You can find the latest specs for 'Lost River' linked from our Blu-ray Release Schedule, where it is indexed under May 5. 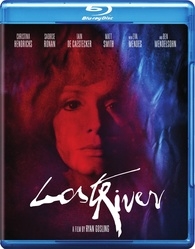