The acclaimed drama will hit stores at the end of next month. Pre-orders are now available at Amazon.

In an early announcement to retailers, Warner Brothers has revealed 'The Good Lie' will arrive on Blu-ray on December 23.

Academy Award® winner Reese Witherspoon (“Walk the Line”) stars alongside Corey Stoll (“House of Cards”) and the Lost Boys, a group of real-life Sudanese refugees. Together, against the backdrop of their shared losses, the Lost Boys and these unlikely strangers find humor in the clash of cultures, and heartbreak as well as hope in the challenges of life in America.

Along with Witherspoon and Stoll, the film stars real-life Sudanese refugees Arnold Oceng (“My Brother the Devil,” “Adulthood”) and newcomer Kuoth Wiel; Ger Duany (“I Heart Huckabees”) and rapper Emmanuel Jal, who were both former child soldiers and Lost Boys; and Femi Oguns (BBC’s “The Casualty”). Rounding out the cast are Sarah Baker as Faith Based Charities volunteer Pamela Lowi; and, as the younger Lost Boys, Peterdeng Mongok, Okwar Jale, Thon Kueth, Deng Ajuet and Keji Jale, all of whom are children of Sudanese refugees.

Specs have yet to be revealed, but supplements will include The Good Lie Journey and deleted scenes.

You can find the latest specs for 'The Good Lie' linked from our Blu-ray Release Schedule, where it is indexed under December 23. 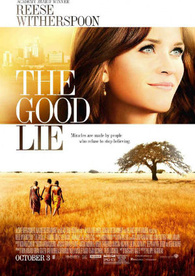