Four 1939 classics will be getting the high-definition treatment in June.

In an early announcement to retailers, Warner Brothers says 'Ninotchka,' 'The Hunchback of Notre Dame,' 'Dark Victory,' and 'Dodge City' will hit Blu-ray on June 9.

All four films (along with 'Gone with the Wind') will also be available in ''The Golden Year Collection - 1939' available on the same date.

'Ninotchka' - A stern Russian woman (Greta Garbo) sent to Paris on official business finds herself attracted to a man (Melvyn Douglas) who represents everything she is supposed to detest. "Garbo Talks!" proclaimed ads when silent star Greta Garbo debuted in talkies. Nine years and 12 classic screen dramas later, the gifted movie legend was ready for another change. Garbo Laughs! cheered the publicity for her first comedy, a frothy tale of a dour Russian envoy sublimating her womanhood for Soviet brotherhood until she falls for a suave Parisian man-about-town (Melvyn Douglas).

Charles Laughton endured a daily five-and-a-half hour makeup session to become Quasimodo, Victor Hugo's mocked and vilified anti-hero. The result was one of his best performances -- outsized yet nuanced, heartrending yet inspiring. Maureen O'Hara is the gypsy Esmeralda, whose simple act of pity frees the emotions within Quasimodo. When she is wrongly condemned, he rescues her from hanging, sweeping all of Paris into a fight for justice.

'Dark Victory' - A young socialite is diagnosed with an inoperable brain tumor and must decide whether she'll meet her final days with dignity. Bette Davis' bravura, moving but never morbid performance as Judith Traherne, a dying heiress determined to find happiness in her few remaining months, turns the film into a three-hankie classic. But that success would never have happened if Davis hadn't pestered studio brass to buy Dark Victory's story rights. Jack Warner finally did so skeptically. "Who wants to see a dame go blind?" he asked. Almost everyone was the answer: Dark Victory was Davis' biggest box-office hit yet and garnered three Academy Award nominations for 1939's Best Picture, Best Actress (Davis) and Best Music, Original Score (Max Steiner).

'Dodge City' - Wade Hatton (Errol Flynn), a Texas cattle agent, witnesses firsthand the brutal lawlessness of Dodge City and takes the job of sheriff to clean the town up. In his first of eight Westerns, Flynn is as able with a six-shooter as he was with a swashbuckler's sword. He confronts lynch mobs, slams outlaws into jail and escapes (along with co-star Olivia de Havilland) from a fiery, locked railroad car. Cheered for Flynn's sagebrush debut, its vivid Technicolor look and spectacular saloon brawl that may have employed every available Hollywood stunt person, Dodge City later gained another distinction when it inspired Mel Brooks' cowboy parody Blazing Saddles.

You can find the latest specs for 'Ninotchka,' 'The Hunchback of Notre Dame,' 'Dark Victory'' and 'Dodge City' linked from our Blu-ray Release Schedule, where it is indexed under June 9. 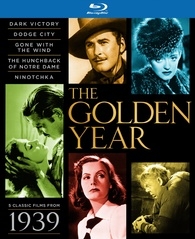