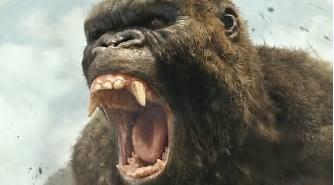 This compelling, original adventure tells the story of a diverse team of scientists, soldiers and adventurers uniting to explore a mythical, uncharted island in the Pacific, as dangerous as it is beautiful. Cut off from everything they know, the team ventures into the domain of the mighty Kong, igniting the ultimate battle between man and nature. As their mission of discovery becomes one of survival, they must fight to escape a primal Eden in which humanity does not belong.

Specs have yet to be revealed, but supplements include: Director's Commentary; Creating a King: Realizing an Icon; Creating a King: Summoning a God; Monarch Files 2.0; Tom Hiddleston: The Intrepid Traveler; Through the Lens: Brie Larson's Photography; On Location: Vietnam; and Deleted Scenes.

You can find the latest specs for 'Kong: Skull Island' linked from our Blu-ray Release Schedule, where it's indexed under July 18.