The follow-up to 'The Conjuring' is now up for pre-order at Amazon.

In an early announcement to retailers, Warner Brothers is working on 'Annabelle' for Blu-ray on January 20.

She terrified you in "The Conjuring," but this is where it all began for Annabelle. Capable of unspeakable evil, the actual doll exists locked up in an occult museum in Connecticut — visited only by a priest who blesses her twice a month.

On one horrific night, their home is invaded by members of a satanic cult, who violently attack the couple. Spilled blood and terror are not all they leave behind. The cultists have conjured an entity so malevolent that nothing they did will compare to the sinister conduit to the damned that is now...Annabelle.

The release will feature 1080p video, a lossless 5.1 soundtrack, and supplements include: The Curse of Annabelle, Bloody Tears of Possession, Dolls of the Demon, A Demonic Process, and Deleted Scenes.

You can find the latest specs for 'Annabelle' linked from our Blu-ray Release Schedule, where it's indexed under January 20. 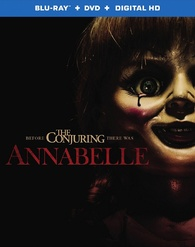