Four film classics are planned for Blu-ray this October.

In an early announcement to retailers, Warner Brothers is preparing to bring 'Special Effects Collection' on Blu-ray on October 6. The films will also be sold separately.

The Beast from 20,000 Fathoms - An A-bomb test in the Arctic awakens The Beast From 20,000 Fathoms (1953), and it makes New York City its stomping ground in the movie (based on a story by Ray Bradbury) that launched a string of Atomic Age creature features. Starring Paul Hubschmid, Cecil Kellaway, Kenneth Tobey, Donald Woods, and Ross Elliott.

Son of Kong - Carl Denham, the showman who brought Kong to New York, returns to Skull Island in search of a rumored treasure. He finds diamonds, all right. And something even more remarkable - Kong's son, a spunky 12-footer with a winning personality and his dad's awesome strength. The filmmakers who created King Kong kept the king-sized excitement going with this sequel, released the same year as the original. Robert Armstrong reprises the role of Denham, paired with a new damsel in distress, played by Helen Mack. The two rescue Kong Jr. from a quicksand pit and get in return a devoted protector who defends them from fierce prehistoric monsters, including a giant cave bear. But when a mighty earthquake strikes Skull Island, even the son of Kong may not be powerful enough to save them.

Specs and supplements haven't been revealed yet, but the suggested list price for each Blu-ray is $19.98, while the boxed set is $54.96.

You can find the latest specs for all of these titles linked from our Blu-ray Release Schedule, where they are indexed under October 6. 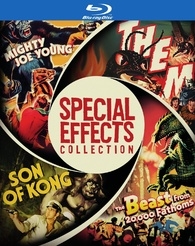