The fourth season of the sci-fi series starring Noah Wyle and Will Patton will invade Blu-ray in June.

In an early announcement to retailers, Warner Brothers is preparing to bring 'Falling Skies: The Complete Fourth Season ' on Blu-ray on June 2.

Aliens have attacked the Earth, and they won. Now, a small group of survivors surrounding major cities around the world must band together and rebuild some sort of society. Not only must they figure out how to work together, they must figure how to eliminate the new alien race who have taken over their planet. Tom Mason (Wyle), a Boston historian, has his family torn apart. His knowledge of how civilizations are born makes him an ideal leader for starting over. But his desire to reunite family lead him down a path more dangerous than planning a society. Everyday people must become heroes, normal humans must make priorities between family and civilization. The idea of what was always known is destroyed, and they must redefine existence. Above it all are a race of aliens to whom humanity is nothing. As Season Four opens, The Mason clan and the remaining 2nd Mass suddenly find themselves under brutal attack by a new Espheni war machine.

You can find the latest specs for 'Falling Skies: The Complete Fourth Season ' linked from our Blu-ray Release Schedule, where it is indexed under June 2. 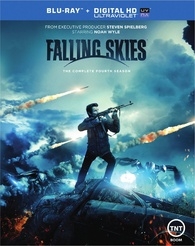