The drama starring Will Smith, Edward Norton, Keira Knightly, Kate Winslet, and Helen Mirren will have a Blu-ray release next month.

In an early announcement to retailers, Warner Brothers is working on 'Collateral Beauty' for Blu-ray on March 14.

When a successful New York ad executive suffers a personal tragedy and retreats from life, his friends devise a drastic plan to reach him before he loses everything. Pushing him to the very edge, they force him to confront the truth in surprising and profoundly human ways. From Oscar-winning director David Frankel, this thought-provoking drama explores how even the deepest loss can reveal moments of beauty, and how the constants of love, time and death interlock in a life fully lived.

The release will include A Modern Fable: Discovering Collateral Beauty - Join the cast and crew as they reveal how they were inspired to look at their lives in a new light.

You can find the latest specs for 'Collateral Beauty' linked from our Blu-ray Release Schedule, where it is indexed under March 14. 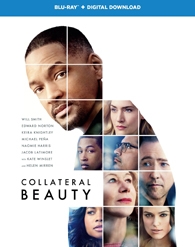