The upcoming Blu-ray release of the classic 1953 musical arrives in stores this March.

In an early announcement to retailers, Warner Brothers is set to release 'Kiss Me Kate' on Blu-ray 3D (2D included) on March 3.

'Kiss Me Kate', one of the jewels in the Warner library, joins 'Dial M For Murder' and 'House of Wax' as the third restoration by Warner Bros. Motion Picture Imaging (MPI) of films originally shot in 3D.

Based on Shakespeare’s The Taming of the Shrew, 'Kiss Me Kate' was first a hit Broadway production, sweeping the 1949 Tony Awards in six categories, including the first Tony presented for Best Musical. It ran from 1948 to 1951 and was Cole Porter’s only Broadway show to play more than 1,000 performances.

'Kiss Me Kate' (1953) was brought to the screen by a team of M-G-M veterans -- producer Jack Cummings (Seven Brides for Seven Brothers, Lovely to Look At), screenplay writer Dorothy Kingsley (Seven Brides for Seven Brothers) and director George Sidney (Showboat, Anchors Aweigh, Annie Get Your Gun). Legendary Hermes Pan choreographed the film’s electrifying dances. Pan also allowed co-star Bob Fosse to add his own choreography to the climactic “From This Moment On’ number, in which he appears with Carol Haney. Fosse has acknowledged his work on the film as his big break and the turning point of his legendary career.

The film version, which received an Academy Award nomination for Best Scoring of a Musical Picture (Saul Chaplin and André Previn), is brimming with classic Porter hits such as "Why Can't You Behave?," "Wunderbar," "So in Love," "Too Darn Hot," "Always True to You in My Fashion," and "Brush Up Your Shakespeare." “From This Moment On,” originally written by Porter for another show before it was ultimately discarded, was added to the 'Kiss Me Kate' film score and ended up becoming a smash hit.

The remastered 'Kiss Me Kate' will include uncompressed DTS-HD Master Audio 5.1 surround remixed from original recording stems and magnetic masters and will now be presented in its original theatrical aspect ratio of 1:75:1. Bonus material includes vintage documentaries, shorts, cartoons and the theatrical trailer. The 2D version of the film is also included.

You can find the latest specs for 'Kiss Me Kate' linked from our Blu-ray Release Schedule, where it is indexed under March 3. 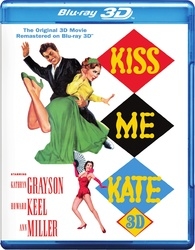