The film starring Tom Cruise, Cameron Diaz, and Penelope Cruz is bound for Blu-ray in June.

In an early announcement to retailers, Warner Brothers says 'Vanilla Sky' for Blu-ray on June 30.

Tom Cruise delivers one of his finest performances in this unforgettably powerful film that reunites him with his Jerry Maguire director, Cameron Crowe. Young, handsome and wealthy, publishing tycoon David Aames (Cruise) can have anything his heart desires. Still, David's charmed life seems incomplete. One night, David meets the woman of his dreams (Penélope Cruz) and believes he may have found the missing piece. But a fateful encounter with a jealous lover (Cameron Diaz) suddenly sends David's world out of control, rocketing him on a roller coaster ride of romance, sex, suspicion and dreams... to a shocking, final awakening you will never forget.

You can find the latest specs for 'Vanilla Sky' linked from our Blu-ray Release Schedule, where it is indexed under June 30. 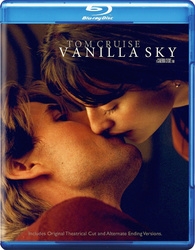