In an early announcement to retailers, Warner Brothers will be releasing 'Singles' on Blu-ray on April 7.

In Seattle during the era of grunge music, the lives and relationships of a group of young people, all living in the same apartment building, go through a period of flux. Among them are waitress and aspiring architect Janet (Bridget Fonda), who finds herself obsessed with bad boy musician Cliff (Matt Dillon); Linda (Kira Sedgwick), an emotionally fragile environmentalist on the look-out for love; and Steve (Campbell Scott), a quintessential nice guy who studies traffic patterns.

The Blu-ray will feature 1080p of video, a DTS-HD Master Audio 5.1 soundtrack, and supplements include: 25 Deleted/Extended/Alternate Scenes; Three Complete Live Performances: Soundgarden - "Birth Ritual", Alice in Chains - "Would?" and "It Ain't Like That Anymore"; Two "Complete Take" Extras with Bill Pullman and Tad; Gag Reel; and Theatrical Trailer.

You can find the latest specs for 'Singles' linked from our Blu-ray Release Schedule, where it is indexed under April 7. 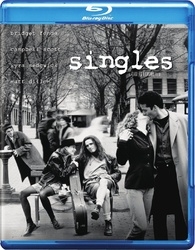