Etan Cohen's comedy will get locked up on Blu-ray this summer, and you can pre-order the disc now.

As previously reported, Warner Bros. is preparing 'Get Hard' for Blu-ray in the near future, and now the date has been set for June 30.

When millionaire hedge fund manager James (Will Ferrell) is nailed for fraud and bound for a stretch in San Quentin, the judge gives him 30 days to get his affairs in order. Desperate, he turns to Darnell (Kevin Hart) to prep him for a life behind bars. But despite James’ one-percenter assumptions, Darnell is a hard-working small business owner who has never received a parking ticket, let alone been to prison. Together, the two men do whatever it takes for James to “get hard” and, in the process, discover how wrong they were about a lot of things—including each other.

The Blu-ray/DVD/Digital Copy will feature both the theatrical and unrated cuts of the film in 1080p, and supplements include: Just Put Your Lips Together and Blow, Get Hard Line-O-Ramas, The Kevin Hart Workout, Face Off with Will Ferrell and Kevin Hart, Ferrell Fighting, A Date with John Mayer, Twerking 101, Will Ferrell: Gangsta, Inmates: Out of Control, Bikers...Babes...Big Bangs, Gag Reel, and Deleted Scenes.

You can find the latest specs for 'Get Hard' linked from our Blu-ray Release Schedule, where it's indexed under June 30th. 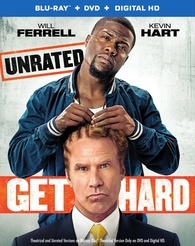