Blu-ray heading 'Into the Storm' in November

Steven Quale's disaster flick will touch down on Blu-ray in November. Order your copy here.

In an early announcement to retailers, Warner Brothers is working on 'Into the Storm' for Blu-ray on November 18.

In the span of a single day, the town of Silverton is ravaged by an unprecedented onslaught of tornadoes. The entire town is at the mercy of the erratic and deadly cyclones, even as storm trackers predict the worst is yet to come. Most people seek shelter, while others run towards the vortex, testing how far a storm chaser will go for that once-in-a-lifetime shot.

Specs haven't been revealed yet, but supplements include: Into the Storm: Tornado Files, Titus: The Ultimate Storm-Chasing Vehicle, and Fake Storms: Real Conditions.

You can find the latest specs for 'Into the Storm' linked from our Blu-ray Release Schedule, where it is indexed under November 18. 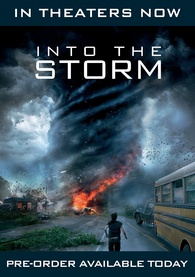