'Batman Vs. Robin' Dated and Detailed for Blu-ray

The next all-new DCU animated movie is set to be released on Blu-ray in April.

In an early announcement to retailers, Warner Brothers will be releasing 'Batman Vs. Robin' on Blu-ray on April 14. A deluxe edition that will include a collectible Batman figurine will also be available on the same day.

The shadows of Gotham City are no place for a child but Damian Wayne (Stuart Allen) is no ordinary child. Now bearing the mantle of Robin, he blazes a headstrong and sometimes reckless trail alongside his father, Batman (Jason O'Mara). While investigating a crime scene, Robin encounters a mysterious figure, Talon (Jeremy Sisto), who leads him on a life-altering course through the depths of Gotham's secret society, known as The Court of Owls. It's a dangerous journey that will force Batman and Robin to face their most dangerous adversary: each other.

The Blu-ray/DVD/Digital Copy combo pack will feature 1080p video, a lossless 5.1 soundtrack, and except for a sneak peek at Justice League: Gods & Monsters, all of the supplements are Blu-ray exclusive and include: Gotham's City Secret: The Mythic Court of Owls - The Court of Owls is the secret society that directly connects the past of Gotham to the current city. Are they silent guardians that are the noble benefactors or are they the malevolent force that manipulates a city toward their grand design?; Talons of the Owl - If the Owls are the masterminds, their instruments of destruction are their assassins. Appropriately called The Talons, these warriors are designed to carry out the will of the Owls; Batman Vs. Robin Audio Commentary; and Bonus cartoons from the DC Comics Vault.

You can find the latest specs for 'Batman Vs. Robin' linked from our Blu-ray Release Schedule, where it is indexed under April 14. 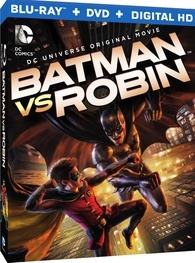