The acclaimed Emmy-winning animated series will reportedly be hitting Blu-ray this year.

As previously reported, according to Comic Con 2018, Warner Brothers is working on 'Batman: The Animated Series' for a Blu-ray release by the end of the year, and now the release has been confirmed for October 16.  EDIT: The date has been changed to October 30.

From the announcement: As the most acclaimed superhero animated television series in history, Batman: The Animated Series has captured the imaginations of generations with its innovative designs, perfect voices, and landmark approach to characters and stories. In late 2018, fans will finally be able to enjoy a remastered Blu-ray release from Warner Bros. Home Entertainment. Join many of the key forces behind Batman: The Animated Series for a celebration of the series and the first announcement of details of the upcoming Blu-ray box set. Panelists include producers Bruce Timm (Batman: The Killing Joke), Paul Dini (Lost, Batman Beyond), Alan Burnett (Suicide Squad: Hell to Pay), and Eric Radomski (Batman: Mask of the Phantasm); eight-time Emmy Award-winning voice director Andrea Romano; actors Kevin Conroy, the fan-favorite voice of Batman, Tara Strong (Batman and Harley Quinn), voice of Barbara Gordon/Batgirl, and Loren Lester (Rock 'n' Roll High School), voice of Robin; and some other beloved Bat-surprises.

When the two shots rang out, Bruce Wayne's life changed forever. He pledged himself to justice, and he held that oath for years. Wearing many names - the Dark Knight, The World's Greatest Detective, the Caped Crusader and Gotham's Greatest Hero - he battled tragic foes like The Joker, Penguin, Mr. Freeze and so many more. But deep inside, he knew that he shared something with them that most of humanity wouldn't understand - a commitment to the fight. The acclaimed, Emmy-winning TV series redefined this complex man as an edgy hero struggling for revenge and redemption each time he donned the cape and cowl, and this comprehensive collection contains every episode, with all the allies, criminals and showdowns in Batman's history.

Batman: The Animated Series had a ground-breaking initial run from 1992-1995, garnering a Primetime Emmy Award in 1993 for Outstanding Animated Program, along with three additional Emmy wins and 13 total Emmy nominations.

The extraordinary villains guest cast was led by Mark Hamill as the now-preeminent voice of The Joker, along with Richard Moll as Harvey Dent, Adrienne Barbeau as Catwoman, and Arleen Sorkin as Harley Quinn – the first character to be created initially for animation (by Bruce Timm & Paul Dini) to jump to comic books. Harley Quinn is now recognizable worldwide in film, television, videogames and comics and is one of DC’s most popular female characters, and Super Villains.

“Batman: The Animated Series set the standard for super hero animation for decades to come, and we’re proud to present this remastered box set to allow new generations – and the series’ vast, avid fanbase – to enjoy this landmark entertainment in the highest quality possible,” said Mary Ellen Thomas, Warner Bros. Home Entertainment Vice President, Family & Animation Marketing. “This is truly a box set for the ages with an array of bonus features to perfectly complement all 109 episodic masterpieces – plus the full-length, remastered films Batman: Mask of the Phantasm and Batman and Mr. Freeze: SubZero.”

The release will be limited to 30,000 copies and will be housed inside a deluxe art book.  The box set will also include:

Batman: Mask of the Phantasm (Feature-Length Film) – When the city’s most feared gangsters are systematically eliminated, the Caped Crusader is blamed. But prowling the Gotham night is a shadowy new villain, the Phantasm, a sinister figure with some link to Batman’s past. Can the Dark Knight elude the police, capture the Phantasm and clear his own name? Unmasking the Phantasm is just one of the twists in this dazzling animated feature. Discover revelations about Batman’s past, his archrival the Joker, and Batman’s most grueling battle ever — the choice between his love for a beautiful woman and his vow to be the defender of right. Batman: Mask of the Phantasm is “a mystery that is genuinely absorbing, suspenseful and moving” (The Cincinnati Enquirer ).

Batman and Mr. Freeze: SubZero (Feature-Length Film) – Batman faces his coolest case ever when Mr. Freeze returns to Gotham City and kidnaps Batgirl. While unraveling the mystery of Batgirl’s disappearance, Batman and Robin discover that she is part of Mr. Freeze’s frigid plan to save his dying wife – no matter what the cost. With time running out, Batman and Robin must find Gotham’s most cold-blooded villain and prevent him from putting Batgirl “on ice” forever. Batman and Mr. Freeze: SubZero includes all of the special features included on the original release: All four episodes of the animated “Mr. Freeze Saga” – Heart of Ice (Batman: The Animated Series), Deep Freeze (Batman: The Animated Series), Cold Comfort (The New Batman Adventures) and Meltdown (Batman Beyond); Art of Batman: Music Montage (Featurette); Get the Picture: How to Draw Batman (Featurette); Arkham Asylum: Examine the Top-Secret Case Files of the Dark Knight’s Many Foes (Featurette); and an Audio Commentary featuring Bruce Timm, Paul Dini, Glen Murakami and James Tucker

The Heart of Batman (All-New Documentary) – A rare gathering of talent defined Batman for a generation. Twenty-five years later, Batman: The Animated Series continues to inspire fans and myth makers all over the world. This hour-long documentary takes an in-depth look at the renowned storytellers behind the landmark series.

Batman: The Legacy Continues Retrospective (Featurette) – DC luminaries join BTAS creators as they explore the combination of exquisite design and in-depth storytelling that helped create a once in a generation show.

Robin Rising: How the Boy Wonder’s Character Evolved (Featurette) – The evolution of Dick Grayson from young ward to crime fighter.

Gotham’s Guardians: The Stalwart Supporting Characters (Featurette) – Batman is not the only hero safeguarding Gotham City. This documentary focuses on the importance of the Dark Knight’s allies in the Batman mythology.

Video Commentary: “House and Garden” – Watch along as Producer Bruce Timm, Director Boyd Kirkland and writer Paul Dini take viewers behind the scenes of an exciting episode of Batman: The Animated Series.

In-Movie Experience – Watch along as Producer Bruce Timm, Director Boyd Kirkland and writer Paul Dini take viewers behind the scenes of an exciting episode of Batman: The Animated Series. 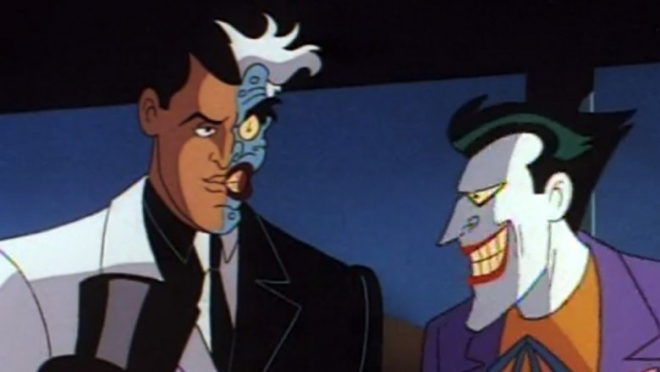 You can find the latest specs for Batman: The Animated Series linked from our Blu-ray Release Schedule, where it is indexed under October 30. 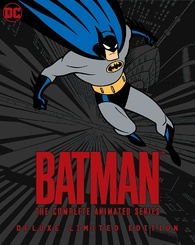