The caped crusader takes on Jack the Ripper in the next DCU animated movie available in February.

In an early announcement to retailers, Warner Brothers is working on 'Batman: Gotham By Gaslight' for Blu-ray and 4K Ultra HD Blu-ray on February 6.

Inspired by the landmark one-shot Elseworlds tale by Brian Augustyn and Mike Mignola, Batman: Gotham By Gaslight takes place at the turn of the century as America's continued industrial revolution is to be showcased at a World's Fair hosted by Gotham City. But while the world prepares to witness the glittery glory of Gotham's technological advances, there is a killer loose in the city's darkest shadows. Preying on the city's women, this killer is as precise as he is cruel. As Police Commissioner James Gordon tries to calm the fears of Gotham's citizens regarding the butcher called Jack the Ripper, the masked vigilante Batman enacts his own detective work – with the help of confident, capable Selina Kyle – to stop the Ripper's murderous spree. Witness a world in flames as the notorious serial killer's controlled savagery meets the calculated stealth of the Dark Knight.

Each release will feature a lossless 5.1 soundtrack and supplements include:

"Caped Fear: The First Elseworld" (Featurette) – Batman in the distant past of Gotham, at the crossroads of where the Gothic 19th century meets the modern age. Jack the Ripper, clashing with Gotham and its ruling elite. The documentary traces the influence of the comic book story, and why Gotham by Gaslight stands the test of time.

You can find the latest specs for Batman: Gotham By Gaslight linked from our Blu-ray and 4K, where it is indexed under February 6. 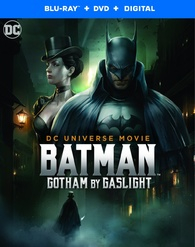 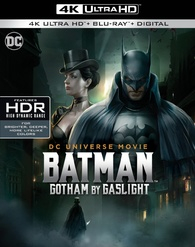