Batman goes missing in the next DC original animated movie coming to Blu-ray in February.

In an early announcement to retailers, Warner Brothers says 'Batman: Bad Blood' will arrive as to Batman on Blu-ray on February 2.

The mysterious disappearance of Batman, coupled with the emergence of powerful and malevolent new villains in Gotham City, force Nightwing (voice of Sean Maher) and Robin (Stuart Allan) to take crime-fighting into their own hands – while simultaneously searching for their missing leader. They’re not alone for long. New super heroes Batwoman (Yvonne Strahovski) and Batwing (Gaius Charles) – each armed with her/his own sensibilities, physical abilities and crime-fighting tools – arrive in Gotham to assist in the cause. As this new “family” strives to find its own dynamic, chilling clues lead the group to suspect the Dark Knight may have gone over to the dark side. It’s up to the entire Bat team to uncover the truth before Gotham City falls prey to its greatest threat yet.

The Blu-ray combo pack will feature 1080p video and supplements include: An exclusive sneak peek at the next DC Universe Original Movie, Justice League vs. Teen Titans; Featurette – “Putting the Fight in the Gotham” – Batman is the world’s greatest detective, but he is also a formidable fighter. This documentary reveals the magic and strategy behind some of the best-choreographed fights in the latest animated film offering, Batman: Bad Blood; Featurette – “Expanding the Family of Batman” – From the Golden Age to today’s current super heroes, the Batman family has both increased in numbers and, occasionally and dramatically, lost some of its members. Each family member brings about a new shade to the Batman mythos while providing an exciting new perspective to the storytelling. This documentary is about the introduction of Batwoman and Batwing into the Batman family in this all-new animated film; and From the DC Comics Vault – Two 22-minute Episodes.

A Deluxe Edition will also be available that includes a limited edition Nightwing figure.

You can find the latest specs for 'Batman: Bad Blood' linked from our Blu-ray Release Schedule, where it is indexed under February 2. 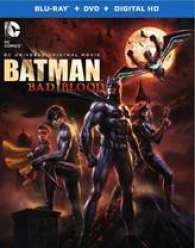