In an early announcement to retailers, Warner Brothers will be releasing 'Hot Pursuit' on Blu-ray on August 11.

In Hot Pursuit, an uptight and by-the-book cop (Reese Witherspoon) tries to protect the sexy and outgoing widow (Sofía Vergara) of a drug boss as they race through Texas, pursued by crooked cops and murderous gunmen. The film is directed by Anne Fletcher (The Proposal) from a screenplay written by David Feeney (TV's New Girl) and John Quaintance (TV's Ben & Kate).

The Blu-ray combo pack will feature 1080p video, lossless 5.1 audio, and supplements include: The Womance - Reese and Sofía's on-set crazy-mashup-antics; Say What? - Watch the hilarity that ensued when Reese and Sofía each tried to speak the other's language; Action Like A Lady - In this action montage we will see all the crazy fun that went into creating the insane action scenes in the film; and an Alternate Ending.

You can find the latest specs for 'Hot Pursuit' linked from our Blu-ray Release Schedule, where it is indexed under August 11. 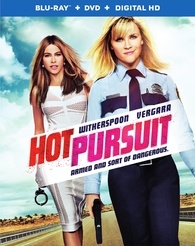